The 2022 FIFA World Cup will be the 22nd edition of the FIFA World Cup which is scheduled to take place in Qatar. It is being held in Qatar for the first time, making this tournament one of the few major sports events that have not been staged in Europe (the only other ones are the Olympic Games).

The opening ceremony is scheduled to begin at 7:30 pm IST.

The opening ceremony will take place on 20 November 2022 at Al Bayt Stadium in Doha. The event will be hosted by Sheikh Tamim bin Hamad Al Thani, the Prime Minister of Qatar and Crown Prince of Saudi Arabia Mohammad Bin Salman Bin Abdulaziz Al Saud.
The host country is expected to display its ability to host large-scale events through this special showcase for FIFA 2022.

This is the second time that FIFA World Cup in Asia. Previously, it was co-hosted by Japan and South Korea in 2002.

Light The Sky is the fourth release from the multi-song FIFA World Cup Qatar 2022™ Official Soundtrack.

South Korea’s BTS said Jungkook, one of seven members of the boy band, will perform at the ceremony. 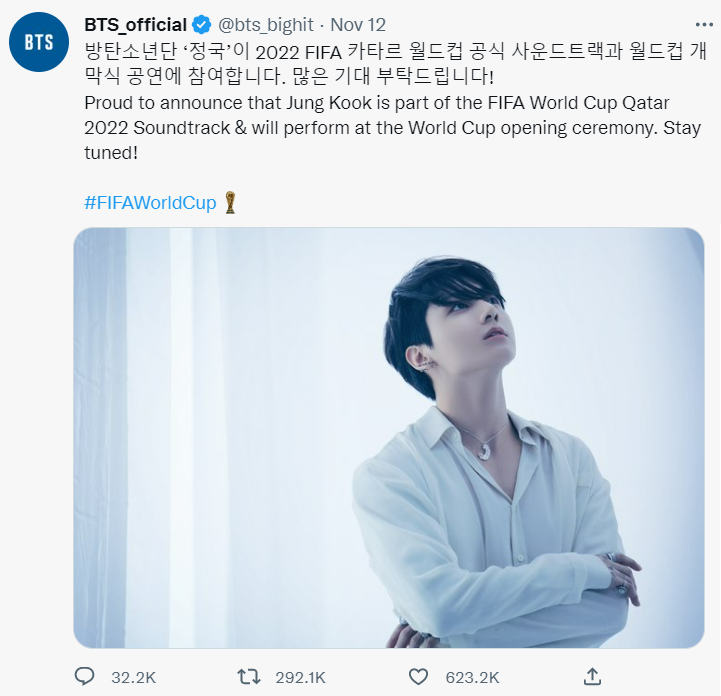 He has got a massive fan base around the world. Other rumored artists are Robbie Williams and Shakira, Bollywood actor Nora Fatehi and nothing is confirmed yet about their participation in the opening ceremony of FIFA 2022.

You can watch the opening ceremony on Sports18 and Sports18 HD TV channels in India. If you are not a subscriber of these channels, buy from your respective DTH providers. For live-streaming, get the Jio Cinema app installed if you have not yet and website for free.